February 07, 2019
Recently I took a survey put out by the Democrats (you know just to mess with them) and I have been paid back 10 fold in free entertainment in the form of chain letters from them. Below is just a sample:

"Nancy Pelosi has been an incredible leader for the Democratic party. She is fearless in the fight against Trump. She’ll never stop fighting for our progressive values.

Now that Democrats control the House, we can finally put an END to Trump’s reign of terror.

That’s why it’s so important that we have strong Democratic leaders who will stand up to Trump and Republicans and fight for our future -- like Nancy!"

What is their left to say accept Venezuela's Maduro was supposedly elected by an overwhelming vote of the people who loved him. Nancy you give a whole new meaning to the term "poll" dancing!

"Here are the facts about the LAST undecided U.S. House race:

FIRST: Democrat Dan McCready was within 900 votes of winning in North Carolina.

NOW: North Carolina’s Board of Elections and a federal judge have REFUSED to certify the results of the election… and they may call for a SPECIAL ELECTION!"

Hey Dan McCready, you can throw out the disputed black elderly votes if your opponent Mark Harris can throw out all of the illegal immigrant votes. Let's see who comes out on top.

From Traindemocrats.org (I'm guessing you've figured out all of the emails have come from this organization):

Folks, we are AMAZED by Stacey Abrams and her brilliant response to Trump’s State of the Union Address!

Even after having her election STOLEN by the Republican Party, Stacey was brave enough to stand up to Trump and his HORRIFIC agenda." 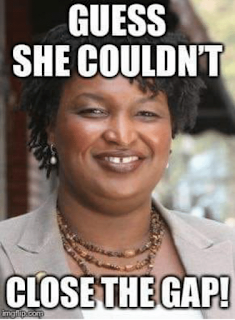 They obviously did not read the transcript of Stacey Abrams' rebuttal to President Trump's State of the Union address, published in the Atlanta Journal Constitution in which Abram's stated:

" We owe more to the millions of everyday folks who keep our economy running: like truck drivers forced to buy their own rigs"

The first thought that comes to my mind from this particular email is that it claims the race was stolen from Abrams but doesn't say who stole it.

I guess there weren't enough elderly black voters to con. The second item that comes to my mind from her SOTU rebuttal is that truckers aren't able to by rigs in a bad economy.

The last email I'm including is, surprisingly not from Traindemocrats.org but from DNC headquarters. The subject of the email reads "We're about to unsubscribe you!" The email reads (in part):

"Our party is counting on you to elect Democrats up and down the ballot -- but according to our records, you haven't opened one of our emails in a while."

August 23, 2018
On the evening of April 14, 2014 Edwin Turlington, a U.S. Army Veteran and Private Investigator who lives in Delaware County, Oklahoma noticed two men starting a fire on adjacent property owned by his brother. Ed tells me, "When I purchased the property it was land locked so my brother purchased the property next to it so I would not have to get an easement."

"Found three strangers, including convicted drug dealer Darrell Philpott cooking Meth on land his brother recently contracted for and already acquired the right to possess. Relying on his law enforcement training and experience, Ed realized the men had taken the license plates off their truck, which is a significant indicator they were going out into the community with bad intentions. Ed executed a citizen's arrest in accordance with Oklahoma statutes. Rather than submit to t…
Post a Comment
Read more

"Laurin Stennis’ flag design has gained so much popularity that even those who order the flag want her autograph. She matched the colors exactly to the United States flag.
“I think those are wonderful colors and the symbolism is meaningful, but also this is a strong standalone but when you pair it with the United States flag they make a handsome couple,” said Stennis.
Nineteen stars circle around a large star, which represents Mississippi as the 20th state to join the Union in 1817. The large star is called Bonnie Blue.
Stennis had some help producing the flags with Complete Flag Source. To date, well over 2,000 Stennis flags have been sold."
According to the report Stennis' asks:
"Is our logo doing it’s job? I would argue absolutely not because every time it comes up we fight about and we get tense.”

Okay, where to start?
WREG reports that the flag is already very popular. That is false. Yes two thousand flags…
Post a Comment
Read more

September 10, 2019
America is in the midst of an epidemic in which historical monuments across America are being taken down. The majority of these monuments are located in the South, dedicated to remembering the common Confederate soldiers, its leaders and the hallowed ground on which so much blood was shed as two factions of the American continent went to war over political differences.
Newly elected President Abraham Lincoln envisioned a Union with a strong central government in which the states would be subservient and Northern industrial interests would be protected. Political leaders in the South envisioned a more traditional path for the country in which the states would retain the majority of power and the central government would operate in a more limited role subservient to the states.
It was a bloody, costly brutal war in which (depending on whose figures are cited) 620,000 American soldiers died by combat , starvation and disease.  It is only natural that both factions honored those who ser…
Post a Comment
Read more